The link to attend can be found here:

The meeting agenda will include remarks from outgoing President, Tom van Buren and President-elect Maria Kennedy; a report from Executive Director Ellen McHale; and opportunities to interact with other members and attendees.

Please plan to join us for this celebratory event!

The slate for members and officers of the Board of Directors of New York Folklore is to be presented as follows: 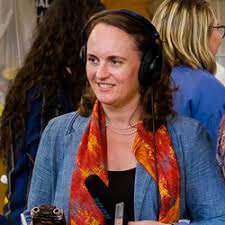 Maria Kennedy is the Administrative Director of the New Jersey Folk Festival at Rutgers University. She is a faculty member in the Department of American Studies, where she teaches classes on folklore, public humanities, and supervises student interns on the folk festival’s staff. She previously served as the Folk Arts Coordinator for The ARTS Council of the Southern Finger Lakes and worked as a graduate assistant at Traditional Arts Indiana. Her PhD in Folklore at Indiana University examined environmental conservation and agricultural heritage in the United Kingdom, looking at practices of orchard conservation and craft cider making. Maria has lifelong connections to New York state, having grown up visiting her grandparents in the North Country and cousins in the Hudson Valley. She continues her interest in orchards heritage as an avid connoisseur of New York cider. Dr. James C. Hall joined RIT in 2014 as the Executive Director for the Center for Multidisciplinary Studies, later renamed the School of Individualized Study. Previously, he was director of New College at Alabama and executive director of the Consortium for Innovative Environments in Learning. Prior to the University of Alabama, Dr. Hall taught at the University of Illinois at Chicago. Dr. Hall completed his Ph.D. and MA in American studies at the University of Iowa. He has also completed a MA in religion and culture and BA in English at Wilfrid Laurier University in Waterloo, Ontario. His research and professional interests include African-American literature as well as higher education innovation and reform. Evelyn D’Agostino Sasso, formerly of the Republic of Panama, serves the Xerox Corporation as International Logistics Analyst. She currently is board member of HAPA (Hispanic Association for Professional Advancement at Xerox corporation- Rochester Chapter), Rochester La Voz newspaper advisory board, founder of Grupo Cultural Latinos en Rochester, and Artistic Director for Avenue D Afro-Latino Dance Group.  She is a graduate of the Catholic University Santa Maria La Antigua of Panama.  The organization which Evelyn helped found, Grupo Cultural Latinos En Rochester, was founded in 2013  in the belief that “the arts have a unique power to engage and  maintain our Children’s Cultural Heritage.” Mackenzie Kwok received her Master’s degree in anthropology at the University of  Cambridge, England, after completing a BA in American Studies and Folklore at UNC Chapel Hill. She wrote her undergraduate thesis on Asian American Foodways in North Carolina and wrote her Master’s dissertation on Confederate monument toppling, and space-making through chanting.  Mackenzie is currently the Community Engagement Director at City Lore in New York City and is a former Bartis Intern for the Folklife Center of the Library of Congress. Edward Y. J. Millar is a native of Northern New Jersey, and grew up in a mixed Scottish, German, and Malay-Chinese household.  Edward enrolled in the Anthropology and University Honors Program at Seton Hall University in 2008, and received his M.A. in Folklore from the Memorial University of Newfoundland in 2014.   As Curator of Folk Arts at the Castellani Art Museum of Niagara University, Edward conducts original fieldwork in the Buffalo-Niagara region, and develops exhibits, programs and initiatives in collaboration with community members and traditional artists.  As a member of a small staff at a university museum, Edward’s skills and responsibilities have grown to include not only fieldwork, program and exhibit development, and content creation typical of the position, but also: audio and video editing, multimedia production, graphic design, preparatory work, framing, lighting, construction, and exhibit installation. Wilfredo Morel is a highly acclaimed artist known for his sculptures utilizing recycled materials, related to the communities where the materials are found. Morel is also a community relations professional at Sun River Health Care, where he assists migrant workers, HIV/AIDS patients and the LGBT population with health care disparities, concerns and needs. William S. Walker is associate professor of history at the Cooperstown Graduate Program. He is the author of A Living Exhibition: The Smithsonian and the Transformation of the Universal Museum and editor of The Inclusive Historian’s Handbook (inclusivehistorian.com). An active public historian, Professor Walker oversees CGP Community Stories, an ongoing oral history project that uses recorded narratives to initiate public dialogue programs on critical social and environmental issues. His areas of expertise are public history, 20th-century U.S. cultural and intellectual history, and the history of race and ethnicity, especially as related to museums. He is committed to equity and inclusion in the field, and his courses emphasize building anti-racist and anti-oppression knowledge and skills. New York Folklore opened its exhibition gallery with an exhibition of ebru paintings by Hatice Erbas-Sorkunlu. Hatice Erbas-Sorkunlu is an ebru artist originally from Turkey, currently living in Buffalo. Hatice studied the traditional Turkish tile art of çini at university, and during her studies became interested in ebru. Hatice learned to do ebru while living in Istanbul and later taught traditional Turkish arts to international students at Fasl-ı Bahar, an Islamic College. Hatice has been practicing ebru for 6 years. For this exhibition, Hatice is exhibiting ten framed pieces that illustrate different ebru techniques, with some incorporating Turkish paper cutting.

Erbas-Sorkunlu provided a hands-on ebru workshop for the public and she was in attendance for the exhibition’s opening reception. Her travel and her participatory workshop were made possible by a grant from the Schenectady Initiative Program. The exhibit will be on view through Labor Day 2019.

New York Folklore underwent extensive renovations and building upgrades to open its new exhibition gallery at the end of March. A grant from the William Gundry Broughton Charitable Foundation provided funds to conduct renovations that included floor repair, painting, carpet installation, and the addition of upgraded ambient and track lighting. As part of New York Folklore’s rebranding efforts, the upgrade also included a new sign for the building’s façade.